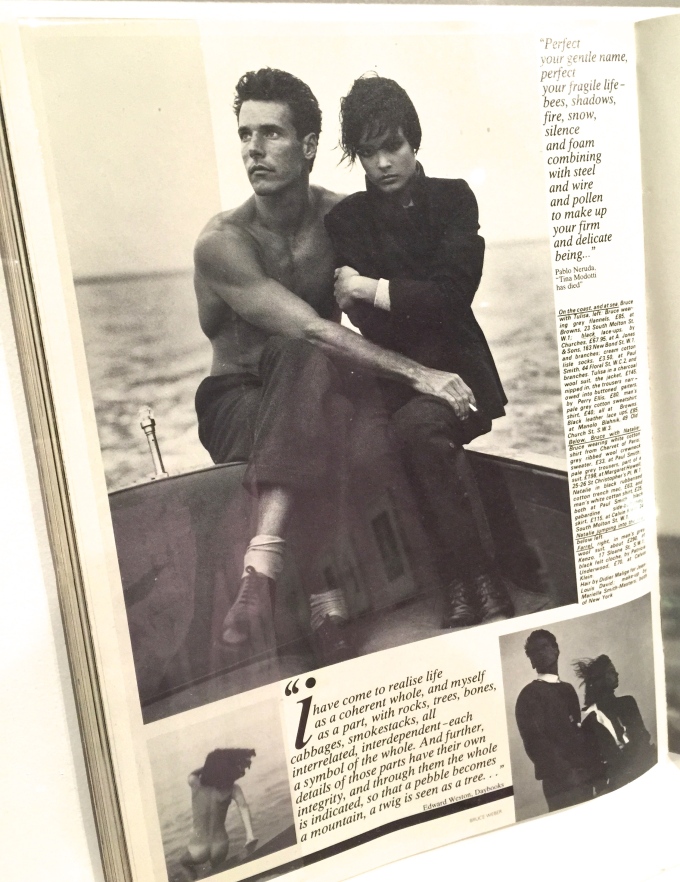 Detail from British Vogue, December 1982. Photograph from the Norton Museum of Art exhibition.

There are dozens of beautiful faces in the Norton Museum of Art’s current exhibition Coming into Fashion: A Century of Photography at Condé Nast. Yet, there was something about the couple in the Bruce Weber photograph featured above that stopped in my tracks. And as I leaned over the vitrine I realized the poetic excerpt floating next to the haunting woman was by Pablo Neruda on the occasion of Tina Modotti’s passing. Suddenly I wasn’t in an art museum but a wonderful netherworld that had collapsed time and space to bring together great personages of the twentieth century.

Digging a bit deeper I discovered that this feature from the December 1982 issue of British Vogue was titled “Under Weston Eyes,” styled by no other than the most fabulous Grace Coddington. As the title suggests, this 10-page spread was Weber’s tribute to the great American photographer Edward Weston: “The group [in the feature] are friends, spending time early fall 1982 in and around Bruce Weber’s Long Island home. They are dressed in the fierce and soft monotones of a Weston print—not only in homage, this is part of fashion now.” In this tribute the figures are stand-ins for Weston’s infamous circle of friends, among them the beautiful and tragic Tina Modotti. 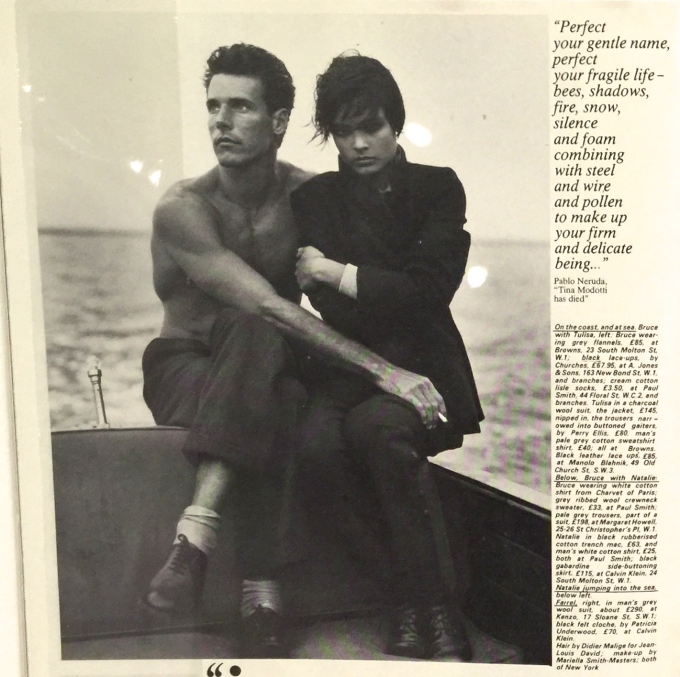 Back on the boat, Soto and Bruce Hulse make a disarming couple. Perhaps it’s because Hulse is comfortable and open in his undressed state while Soto is guarded and defiant. Or perhaps it’s Neruda’s words juxtaposed with her stare:

Perfect, your gentle name, perfect, your fragile life— bees, shadows, fire, snow, silence and foam combining with steel and wire and pollen to make up your firm and delicate being…” (Pablo Neruda, “Tina Modotti has died”)

Part of Neruda’s epitaph is actually engraved on Modotti’s tombstone, though her website has a different translation. I wasn’t aware that Neruda knew Modotti, let alone well enough to write such a moving tribute. I also didn’t know this 1982 British Vogue feature had such an intense following, inspiring countless Tumblr and Pinterest pages as well as a recent exhibition in Long Island. I completely understand the enduring appeal of this image. After all, in a crowd of flawlessly painted faces, perfect coiffures, and haute couture this understated yet potent couple managed to haunt me days after I saw the show.